Femoral Bypass Along With AD

When my AD happened I also experienced my left leg going completely cold - no blood supply was getting to it due to the location of the dissection.   For numerous reasons the surgeons ended up performing a right to left femoral bypass to resupply the lower left side of my body with blood ( along with their repair of the actual AD and valve ).  I am wondering if anyone else out there has a simiilar situation and, if so, how has it been affecting their life.   I find it to be maybe the most invasive part of my post AD exisitence...  Thanks to everyone for being here and best wished to you all.

Replies to This Discussion

I don't share your experience, how is your leg doing now days?

Thanks for your note.   The leg is OK - still mostly numb and not 100% useable but better than it was at the beginning and certainly better than some of the alternatives would have made it.

I am not sure how common this type of thing is among AD people - I hadn't read on this site anything about others experiencing it.

I hope that you are doing well - your posts are always positive and uplifting,

I'm not sure how common, but I know you're not alone.  Is your doctor sending you to physical therapy or some sort of rehab for the leg?  The only issue I have, I do have a scar in the right side groin area, I think this had to do with bypass(Not sure, I had a new baby so most of my questions centered around her, while I forgot all about me...lol) but since the surger my right thigh is extremely sensitive, shaving or just lightly grazing causes pain/discomfort. Which from experience, having a tumor removed from my spinal cord 5yrs prior to dissection, I can say feels like nerve damage.  But talk not only to your cardio doc but family doc, they may be able to help get your leg even better.

I have the same problem with the left leg, but still have not had surgery.  I am taking neurotin for circulation, and it has helped a lot.  I still get severe numbness in the leg and also burning if I walk too far, but I do have use of the leg.  The issue with my leg is now more of a hindrance and more painful than the dissection, but I consider myself lucky to be here.... so I will deal with it with a positive attitude!

Thank you for your reply Sonya.  I hope that you are doing well.  I had not seen anyone else talking about this issue.   I wasn't even aware that there had been any permanent effects with my leg until a few days after the surgery.   I can relate to the numbness and burning.   You are so right about the positive attitude.

In my situation, there was immediate numbness of the leg when the dissection happened.  When returning from the hospital, I could not walk from the bedroom to the kitchen and back without the leg burning severely.  It burned like I had done 100 squats on that one leg, and it was an aggravation on top of the pain I suffered from the dissection.  I have run across several people with this problem due to the dissection blocking the flow of blood.  I pray for all of us fighting this disease, and I have been pushing to get people educated!  So few people know the symptoms... even Dr's, but knowledge is power!  I hope you are doing well in your fight and live to see many years of advancement and knowledge concerning AD!

Jeff  I  didn't  have a Femoral bipass  however  My secondary  anuerysm was  IN  My Popilteal Artery which is the next one  down  from the femoral (behind The Knee),  I suffered an undiagnosed  Ascending Dissection in  2009  while  I was in the hospital (31 days)  I'd  a rough  time of it  to say the least, including  pneumonia...My surgery was  done AT Yale New Haven Hospital which  has  one of the top 10  aortic  Specialties  Cardiac  and  transplant  surgeon,  once  they figured  I was going to survive, the  Vascular surgeon suggested  They're  Have  done the Popilteal Had they though I could  have handled  the extra 4 or 5 hours  of  surgery..  as it was I cam  home  after a month  recovered and even  began  riding a Bike , Ultimatley I had the  2nd  Surgery in November 2010 ,,,,,, its  2/2014 I  have  Numbness I have  swelling  (although I've  come a long way)  I  have  cold limbs/blood flow  issues  still   and   with this winter  being a bad as its been... its been tough..  They  wanted  me to use a walker  when i first  got out , NOT  enough room in my apartment  to bother, I was given  a cane,  which  I barely used  it at all.. when the  weather   is  bad   We  Have a nice indoor mall a mile  away..

below  is  a Picture  that  shows The  lower Leg  with 87 Staples  above  and 29 in the  lower calf its not  pretty  but its  better then the alternative...amputation....

Thanks for your reply.   116 staples... Whoa.    The femoral artery thing opened my eyes to the true interconnectedness of everything.    I am on Warfarin, but mostly because I got an artificial valve as part of the deal.  My left leg is virtually always numb but the blood flow is good.  They say that the numbness is a result of damage that happened before everything got figured out. Hopefully you'll be back on your bike when the weather finally improves.

Secondary  Anuerysms to the "main"  one(s) are More  common  then we  are  lead  to believe... in  some of us,  there is a direct connection between  Periferal Artery Disease (PAD) and this info  comes  from  My  Vascular surgeon  Bart Muhs who  took  direct  part in MY Aortic  Dissection emergency  surgury as well as My Popilteal Bipass...  I  have American and Canadian  friends who have  secondary  anuerysms in the  Arteries  that  specificly feed  they're  Kidneys and  liver aand other  various  vital  organs.. ( one  has to think which  would  be more  significant  a  Femoral or Popilteal  (loosing  a leg or foot,  or..... Point  is  this is  why   followups and  CT   scans etc...

I've  added  a couple  of  Graphics that  show  the  Aorta  and branches,  and also  a couple of the arteries...  As  I said  Two of  my freinds  Had  secondary  anuerysms in these  areas.. 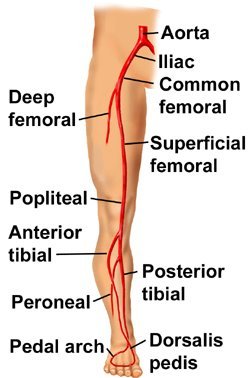 Hey Jim - Cool post.   You don't hear too much about secondary occurrences any where around the net - probably a good thing to keep in mind - especially given the complexity of the whole interconnected system that your graphics illustrate.

OR - Use the QR Code above